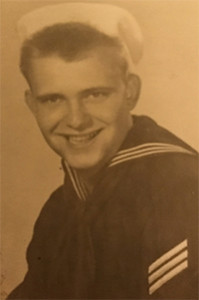 A Celebration of Life for Mr. William J. Foos, age 85, of Clayton, will be held Saturday, December 17th, at 1pm, at the Watertown Elks Lodge 496. There will be no calling hours.

Bill was born July 15th, 1931, in Rochester, the son of Peter and Bertha Schreck. He graduated from Hilton High School and Rochester Institute of Technology.

He entered the United States Navy in 1951 and honorably discharged in 1955, serving in the Korean Conflict.

Bill retired in 1986, after 25 years, as a Millwright at Kodak in Rochester.

He was a member of the Watertown Elks Club, the Clayton American Legion Colon Couch Post 821, a life member of the VFW in Texas, where he was also Shuffleboard Champion, and was also a Commodore of Mantrou Yacht Club in Greece, N.Y.

One brother, Carl, died before him.